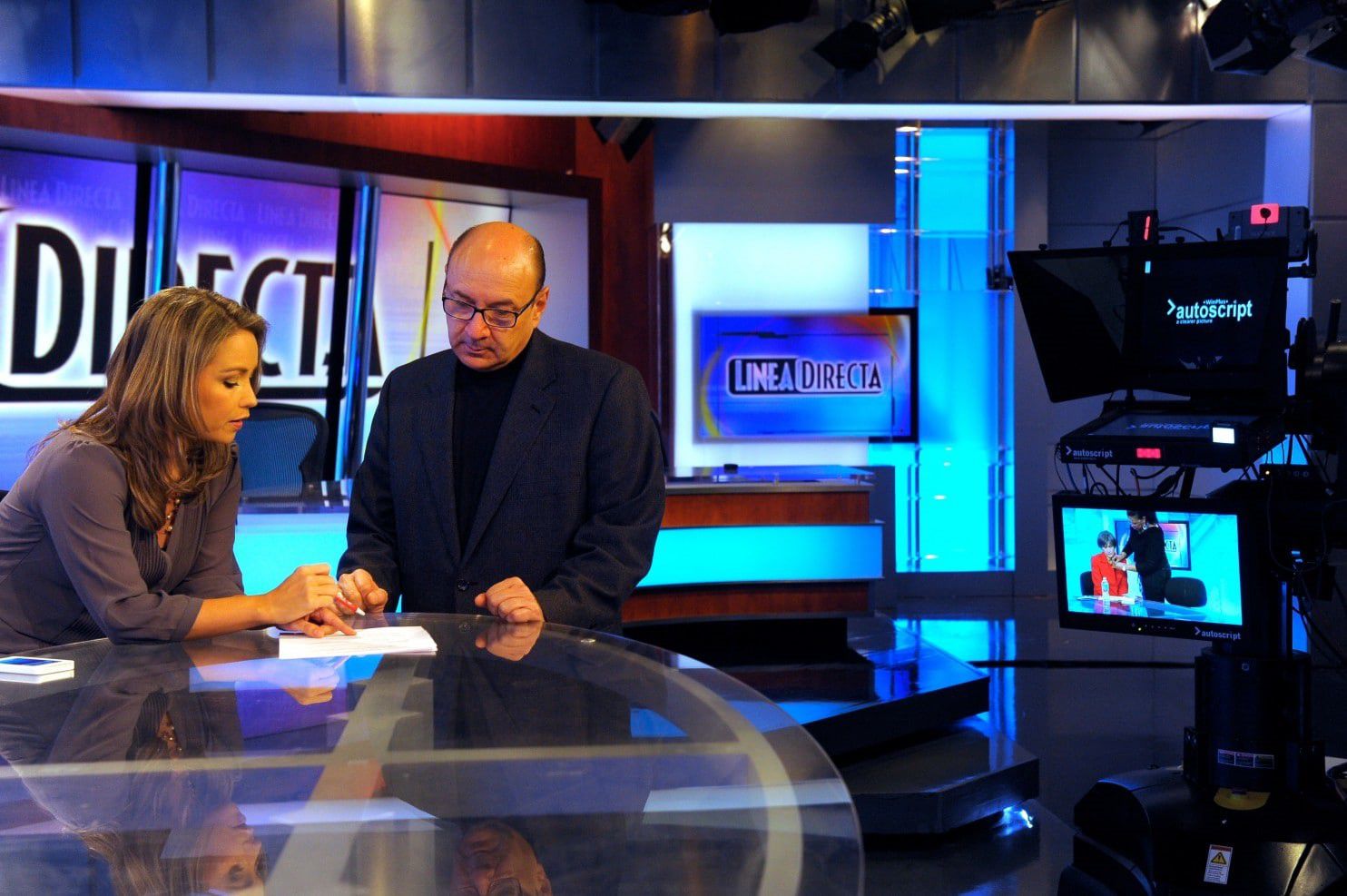 Línea Directa Host, Andrea Sarralde, and Producer Eduardo López on the set of the weekly series, at NBC4 (2015).

Read it on WashingtonPost.com

The worried face of then D.C. Mayor Sharon Pratt Dixon flashed on the television screen, right after images of a torched vehicle, shirtless looters celebrating atop an overturned police cruiser, officers slamming a person against a car and a photo of the Latino man whose shooting by police had provoked three days of riots.

“What steps have been taken to address this grave situation?” a Spanish-speaking narrator says dramatically. “Today on Línea Directa.”

That show, on a May day in 1991, remains one of the most-watched ever in the 25-year history of Línea Directa, which began as a series of unpolished public service announcements and has become the go-to news show for the region’s growing and upwardly mobile Latino community. As its name indicates, the show is and has been a direct line of communication for immigrants, mostly from Central America, and, to a lesser extent, their U.S.-born children.

But with the maturation of this community comes questions about how to stay relevant to 800,000 people, more and more of whom are comfortable speaking English and can fluently mine the Internet and myriad other sources for news and information. “It is our dream that there are more and more young people who don’t need to watch it,” said Línea Directa creator Eduardo López. “Our goal is for them to choose the life in this country they want. For that to happen, their parents need the information to get them there.”

López immigrated to the United States as a child in 1967, after his parents’ divorce, settled in Silver Spring, Md., with his mother, and graduated from Montgomery Blair High School and Syracuse University. After college, López wanted to create programming that would be helpful to the immigrants who were fleeing El Salvador’s civil war. In 1984, he pitched his idea to the D.C. Mayor’s Office of Latino Affairs, under then-Mayor Marion Barry: A show “looking at everyday life in the United States, so that new immigrants can learn how people live here.”

“I just felt a need to do it,” López said. “And it became the mission of my life.”

The earliest version of the program took two years to come to fruition. Working with a young Colombian broadcaster, Arturo Salcedo, and using borrowed equipment and family members as actors, the partners began recording 30-second public service announcements in Spanish on everything from fire prevention to counseling for alcoholism. The spots covered how to use seat belts, enroll children in school and access publicly funded health care — information that was hard for new immigrants to obtain in an era when government agencies rarely had materials written in Spanish, or employees fluent in the language. The spots eventually were broadened into a half-hour news show that the local Univision station included in its prime-time lineup on Thursdays and Saturdays.

The first episode aired in January 1990, about six months before the riots. It featured a young María Gómez, founder of Mary’s Center in Washington’s Adams Morgan neighborhood, talking about the services available to pregnant immigrants. “Women were having babies in bed, in their homes,” Gómez, in her 50s and still running Mary’s Center, recalled in a recent interview. “People were suffering and being exploited because they did not have basic information.”

Línea Directa won awards, and at one point was thought to be reaching nearly half of all Spanish speakers in the metropolitan market. Compared with the comedy shows and telenovelas that were the other staples of Spanish-language programming, the show was a serious and relevant source of news for Latinos during a tumultuous period.

“What sustained them, they said, was the knowledge that they were having an impact…When AIDS became an epidemic, the show’s hosts promoted condom use. When renters were being exploited by landlords, the show explained tenant protection laws.”

The Mount Pleasant riots erupted on a Sunday, after Officer Angela Jewell shot Daniel Gómez, and rumors spread that the Salvadoran immigrant was handcuffed when he was shot. By that Thursday, Pratt (D), as she is now known, was looking for a way to repair relations with the Latino community. Her staff booked her on Línea Directa.

The riots “made an invisible community visible,” recalls Pedro Avilés, a longtime community activist who led the Latino Civil Rights Task Force that Pratt commissioned after the unrest. “The Latino community coalesced into a single voice and into an articulated agenda that we pushed for the next five or six years.” But as the initial crisis passed, D.C. government was consumed by other problems. Because of operational dysfunction and fiscal disarray in the city, power was transferred to a federally appointed Financial Control Board. López and Salcedo were laid off and the show was canceled because of D.C. government budget cuts in 1994. The men founded a nonprofit organization and solicited grants and donations. They were back on the air eight months later.

“They were always trying to see how they could stay alive,” said Ana Sol-Gutiérrez, who served on the board of the group that funded the show, EVS Communications, and now serves as a state delegate representing Montgomery County. “For many years, they simply did not pay themselves.”

López, a self-described workaholic who acted as the show’s producer, slowed down only in 2012, when he was diagnosed with Stage 3 melanoma that is now in remission.

Salcedo, the host, said he turned down other job offers and put Línea Directa ahead of everything, including his family. When his now-former wife became pregnant, an overjoyed Salcedo went to tell López, who turned pale. “‘What about the show?’ he asked me,” Salcedo recalled. “We couldn’t take a day off.” What sustained them, they said, was the knowledge that they were having an impact — the stories of women who escaped domestic violence because of what they learned from the show, or the man who sought a cancer screening, or the wife who offered them a few crumpled dollars in gratitude after her frequently drunk husband was spooked by an episode on driving under the influence.

When AIDS became an epidemic, the show’s hosts promoted condom use. When renters were being exploited by landlords, the show explained tenant protection laws. As Latino activists became more prominent, and in some cases launched political careers, “Línea Directa was a place where we could get air,” said Mauricio Alarcón, a former community activist and local educator.

In 2000, Univision dropped Línea Directa. But Telemundo — which would soon be acquired by NBC Universal — picked it up. The station donated studio time and lent staff members to produce the weekly show, funds for which still came from the EVS foundation. There are no commercials. In 2006, Salcedo left the show to care for his parents. Former Colombian television reporter Andrea Sarralde, who was working for Telemundo in Washington, stepped in. As large numbers of Latinos started buying homes, she talked about mortgage fraud. As more Latinos registered to vote and ran for office, the show focused on options for political engagement.

At first, the only Latino politicians to invite on the show were Gutiérrez and Arlington County Board member, J. Walter Tejada (D). Then came Montgomery County Council member Nancy Navarro (D), Del. Maricé Morales (D-Montgomery), Del. Deni Taveras (D-Adelphi) and more. They discussed legislation affecting undocumented immigrants, bills proposing paid sick leave and minimum-wage increases and, always, the need to register to vote and turn out at the polls. “Not voting is a crime,” Del. Joseline Peña-Melnyk (D-Prince George’s), who is running for Congress, said recently in an emotional plea.

“Línea Directa has grown with our community,” said Nicole Quiroga, general manager of Telemundo Washington. “Twenty years ago, the [show] might have been more instructional, and now it’s more conversational.” But as Latinos become better established in the U.S., the future of Línea Directa is uncertain. The program depends on grants from local governments and partnerships with other organizations, such as the AFL-CIO. It routinely falls short of its fundraising goals. Wendy Thompson, president emerita of EVS Communications and the former general manager of Telemundo, says she would like to see the show replicated nationwide, in communities with large Latino populations.

But López thinks that what Línea Directa does is so rare and relevant in today’s Spanish-speaking media world that he adheres rigidly to the objective: providing basic information to Hispanics on how to live in the Washington region. That worked well for the Latinos who came to this country in recent decades. But with immigration slowing, government agencies and private business offering more information in Spanish, and the children of immigrants growing up fluent in English, it is not clear how long the need will last. “Who will support it? It doesn’t make money,” Salcedo said. “I don’t know any politician or corporation who understands an iota of the work we’ve done.”

For the moment, at least, there is plenty to talk about, especially with a political climate that López describes as more negative for Latinos than any he has seen since starting the show. And so he brings on activists such as Sonia Gutiérrez, who founded an adult English instruction school in the District; artists such as poet Juan Emilio Pacheco; and undocumented immigrant students known as Dreamers — all in an effort, he said, to demonstrate more than a one-dimensional view of Latinos. “Línea Directa helps the community understand,” López said, “that despite offensive attacks, we are contributing positively every day, and that in this country, we can improve our lives.”