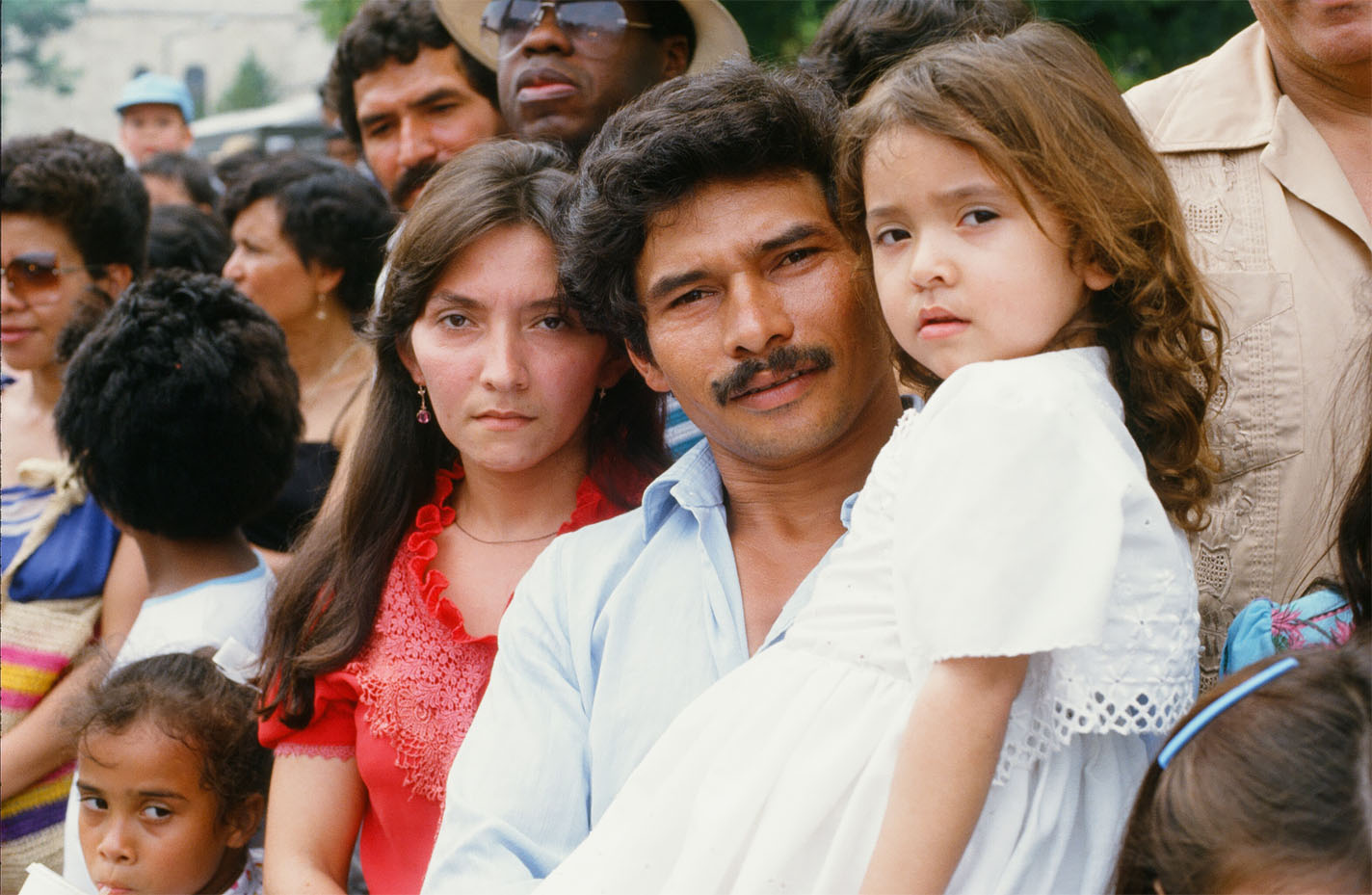 The quick growth of the city’s Latino community is posing difficult questions for the District of Columbia’s African American leadership (1991).

AFTER A TYPICAL riot in one of our nation’s cities during the 1960s, it was a white mayor whose limousine pulled up in front of the television studio where he grudgingly appeared on a show to give the black community a chance to air its grievances and speak directly to the man in charge.

This week it was a black mayor, Sharon Pratt Dixon, who spent an hour Thursday afternoon on the set of Línea Directa (Direct Line), a cable TV show created to give the District’s Hispanic community a chance to speak out. After two days of rioting in Mount Pleasant, Línea Directa featured an Hispanic host — speaking in Spanish — and an Hispanic audience directing its fury — in Spanish — at three black authority figures — the mayor, the chairman of the city council and the local councilman — who listened uncomfortably to a translation of the complaints through ear phones.

In just over 20 years, blacks, long the disadvantaged minority fighting for social and political rights, have become the people in power coping with the anger of a different minority. There could well be more such confrontations ahead in American cities as the Hispanic population grows. By the end of this decade, there will be more young Hispanics in the country than young blacks.

The political irony of the situation is not lost on Washington’s current leaders. “After listening to the Hispanic young people I went home and told my wife it was like listening to myself 20 years ago,” said Council Chairman John Wilson, who was active in the Student Non-Violent Coordinating Committee. “The Hispanic people say we don’t see them, we don’t care, but I understand what it feels like to be invisible more than anyone can imagine.”

Politically active Hispanics, however, are less interested in the twists of history than in wresting a share in the power that blacks have developed in urban politics.

“For blacks, city government control became a reality in the wake of the 1970s, which saw a host of black mayors elected,” said Charles Kamasaki, vice president for research at the National Council of La Raza, the nation’s major Hispanic think tank. “We have not had that concomitant experience in the Hispanic community.”

Although blacks are 12 percent of the American population and Hispanics 9 percent, Kamasaki notes that affirmative action plans are overwhelmingly directed by blacks and run for blacks, “especially on the local level and you can see that in Washington.” The Hispanic population of the District is estimated at between 5 and 10 percent, but less than 1 percent of city employees are Hispanics. Hispanics feel they do not get a fair share of program spending and contracts — and many blame that on the city’s black government.

“There is a certain level of racism against any foreign group by members of the dominant race, and here there is racism by the black community against Latinos,” said Pedro Aviles, chairman of the D.C. Latino Civil Rights Taskforce, which was formed in the wake of last week’s rioting.

“We don’t want problems with blacks or whites, we just want justice,” said Sonia I. Gutierrez, the principal of the Gordon Adult Education Center. “We don’t hate blacks, but blacks discriminate against us. What have we done? In some cases we are coming to this country to escape war.”

From the black perspective, Hispanics may suffer some discrimination, but they were never the victims of slavery or Jim Crow laws. Now, some blacks see them as jumping onto the black civil rights bandwagon just as blacks are starting to gain the fruits of their long struggle.

“I think it’s a fascinating development that the Hispanic community views itself as outsiders whose opportunities are being constricted by a black power structure,” said Milton Morris, director of research for the Joint Center for Political and Economic Studies, the nation’s premier black think tank. “Black America is more prosperous than ever, more politically potent but still struggling to come into its own.”

An angrier version of that statement came from D.C. City Councilman H.R. Crawford (D-Ward 7) who said: “If they {Hispanics} don’t appreciate our country, get out.”

But Hispanics in D.C. do appreciate the city and the nation, said Rita Soler Ossolinski, acting director of the Office of Latino Affairs, although, she noted, as a minority in the city “the Hispanic community feels a lack of acknowledgement from the District government.”

Kamasaki of La Raza agrees: “The demarcation line in Hispanic life is language and culture, and when Hispanics look at blacks they see people culturally more like Anglos — the dominant culture.” Blacks have achieved more power in this society than Hispanics, he added, because they have more political representation, both in city hall and nationally, as well as a well-established network of colleges, civic and professional groups and churches.

The outbreak of Hispanic anger comes at an especially difficult time for a budget-strained city government which is already cutting programs important to many of the needy among its black constitutency. Still, the mayor and other city leaders are quick to acknowledge a special bond between the black community and other struggling minorities.

“I don’t know if we {blacks} have an extra burden to bear,” said Mayor Dixon in an interview after her Línea Directa TV appearance, “but certainly there is a sensitivity that we ought never to lose. And having gone through those painful experiences one ought not just bring scars but hopefully a sensitivity, a humanity that could benefit others.”

That concern was on display in the measured response the mayor authorized police to use against the demonstrators. Her restraint prompted complaints from businessmen, but Dixon defends it as prudent and justified because there was no loss of life. The mayor did not want to “surrender to violence but I don’t want to ignore legitimate concerns and {the Hispanic community’s concerns} are legitimate,” she said, adding that she was also dealing with “people who had experienced terrorism in other countries,” and might have reacted with panic.

Critics complain that Dixon’s approach may legitimize rioting as a way to get a response from the city government. But Dixon heads a government and leads a city filled with people who were involved with protest, if not riots, to get the attention of the establishment.

“Personally,” she said, “I try to remember, and easily remember, what it is like to be where they are. And try to respond as I wanted the system to respond to me and didn’t always respond to me . . . . I know there was a risk in responding as I did to what I thought were legitimate concerns and some may have perceived that as an invitation {to continue rioting} . But I think we were aggressive once we realized there was pure vandalism.”

But empathizing with the Hispanic community’s concerns may be far easier for the city government than addressing them.

Council chairman Wilson observes that the real problem is not black attitudes towards Hispanics, but that the D.C. economy has little room for unskilled people of any race. In addition, he said, the city government is fighting a budget deficit, a recession and the federal government’s on-going withdrawal of funds from state and local governments. In response to the complaint that Hispanics do not get a share of city dollars commensurate with their proportion in the population, Wilson replied, with some irritation, that the city does not allocate spending on the basis of race.

Smith notes that although his ward has the largest share of the city’s Hispanic population, the ward with the largest number of Hispanic voters is Ward 3 in upper northwest. “As Hispanics get education and money they move out of Mount Pleasant,” he said.

Adds Wilson: “We are dealing here with people living in poverty, in crowded apartments . . . . We are creating a society with too many people, too few skills and nothing to lose. I don’t know how much more we can absorb here . . . . Ultimately, we’re playing one group of poor people against the other.”

In fact, Dixon was worried that the violence could easily have spilled over from Hispanics in Mount Pleasant and Adams-Morgan to blacks in Columbia Heights and along 14th Street. Federal and local budget cutbacks, she says, have resulted in “levels of discontent throughout this city.”

As for the notion that Hispanics, especially the illegals, don’t belong in the city, Dixon said such sentiments are rife in the black community but calls them “very counter-productive.” “When people are under pressure and frustrated sometimes they surrender to their own worst instincts,” she said. “We in the African-American community certainly can’t afford to do that . . . . We are a community still struggling to get our fair shake in the system. What happens is you end up being threatened by others who are fighting for the same crumbs. And that ought not be the focus. The focus ought to be for all of us to get a fair shake.”

Morris of the Joint Center noted that when blacks rioted recently in Miami, a city with a Hispanic government, there was far more violence and loss of life because of aggressive police tactics. But Kamasaki, of La Raza, said that is “the only example of that,” and it is far more common to see “cities with black mayors where you have 25 percent of the folks eligible for housing assistance are Hispanic but only 2 percent of Hispanics get housing assistance.”

However, Dixon faults Hispanics for not engaging the city government to let their ideas, needs and problems be known to city officials. “I do think in order to become a part of the community here you have to make an effort,” she said. “Hispanics are not involved in ANC or town meetings.”

The Hispanic refusal to adjust to American culture is an additional problem, Dixon said: “They say when in Rome do as the Romans do and that, too, must be the order of the day. It’s to everyone’s advantage to learn how to speak English . . . . You cannot have people drinking liquor in public because that is an inappropriate and criminal activity. You cannot have people urinating in public. That is not allowed. And you have to respond to that symbol of authority in whatever form it takes in our culture, including a woman who is a police officer . . .” — and a woman who is mayor.

The mayor, who is coping with bureaucratic and budget problems left unattended for years because of the troubles of former Mayor Barry, pointed a finger at the business community for not doing enough to help the city at a time of crisis.

“They have got to get involved in the fabric of this community,” she said. “They’ve got to start hiring more, getting involved with the schools more, training people so they achieve a better partnership.”

Is the black mayor blaming whites — the majority of city’s business owners?

“No, it’s the business community generally,” she said. “I realize they are going through a recession. But it is in everyone’s interest for them to be better corporate citizens. Some are — but they need to do it in more significant ways, such as summer jobs . . . . People are going to have to give a little more — the affluent, Anglo, African-American and Hispanic. Ultimately it is in everybody’s best interest to do it.”